This race started and finished at Priory Country Park, Bedford at 6:30pm.

Results for the Kenilworth Half Marathon – 2.9.18

This year the race started and finished in Kenilworth Town Centre and was an undulating out and back course along quiet country lanes with the first and last part on the town’s main street.   For the second year Massey’s won the trophy for the most represented club with 77 runners. (Position based on gun time).  Read Dave’s race report here.

Results for the Waterside Half Marathon – 2.9.18

This was the 37th running of the Waterside Half Marathon, Derry~Londonderry.  Starting in Ebrington Square, the route took runners across the river to the cityside, showcasing the parks, greenways and bridges before finishing at St Columb’s Park.

The 2018 Spitfire 10K began outside Hangar One, taking runners around the Museum site, past several iconic aircraft, before entering the RAF Cosford airfield!  During this gently undulating course, runners got the chance to run up and down the runway! 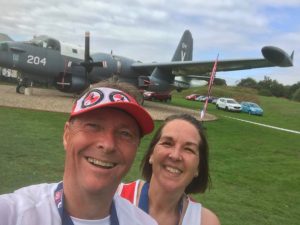 Results for the Little Aston 5 – 2.9.18This race was organised by Royal Sutton Coldfield Athletics Club and took place on quiet undulating country lanes around Little Sutton.