This event showcased the very best of the City of York and its surrounding countryside. The route went through the city centre, taking in the iconic sights of York the stunning York Minster.  Leaving the city walls behind runners headed out towards Heworth Green, and continuing through the countryside to Stockton on the Forest, Upper Helmsley, Sand Hutton, through Buttercrambe Moor Wood and then towards Stamford Bridge.  Runners then went through the villages of Murton, Gate Helmsley, Dunnington and Osbaldwick Village.  Finally heading towards the University of York campus and the finish.  Read Sam’s race report here.

This half marathon started on Broad Street and headed towards Calthorpe Park and Cannon Hill Park, after mile 4 runners ran around Edgbaston and then south along the Pershore Road.  At mile 7-8 the route turned around and headed back along the same road to Selly Park at mile 9.  The race continued back towards the city centre and the finish on the Queensway.  Read Helen’s race report here.

This race started on Bridgewater Way with the first 3 miles around the Old Trafford area, runners then headed down Chester Road through Stetford.  The route continued south to Sale and at the 7 mile point the course started to head back north, at 11 miles the runners re-joined the route they taken southwards, back along Chester Road until 12.5 miles when the course headed towards Lancashire County Cricket Club and the finish line and Race Village. 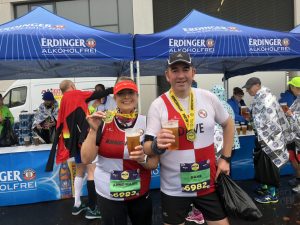 Starting and finishing in Victoria Park, the full and half marathon route headed out of Leicester on the Melton Road, just after 5 miles the half-marathon runners split off the half routel route headed back towards the town centre passing the National Space Centre, Frog Island, and Leicester Cathedral.

This race started and finished on the Embankment in Peterborough.

The Cabbage Patch 10 is a highly professional race. It is a race run by runners for runners and is almost as old as The London Marathon! It is one of the flattest, most scenic, ten mile races in the country aimed at runners of all standards on roads and towpaths. Starting in King Street, Twickenham, the route crosses the Thames at Kingston Bridge and Richmond Bridge, runs along the Riverside to finish on the drive in front of the York House Civic Building in Twickenham.  Read Claire’s report here. 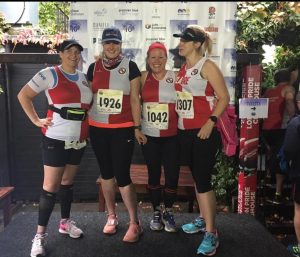 The Green Leek Run is a multi-terrain 10.5k race through the Warwickshire Countryside. The race started near to Burton Green Primary School and finished near All Saints’ primary school in Leek Wootton, with proceeds from the event supporting these two schools.  Most of the course was run on the historic Kenilworth Greenway, the site of the old Kenilworth Railway. Runners then went through Abbey Fields, with views of Kenilworth Castle, before heading to the finish at The Warwickshire Golf Club.  Well done to Kevin Hinson, David Cass, Phyllis Douglas and Sally Slevin who all won their age categories.

This 10k event was centred around the market town of Daventry in Northamptonshire.  The route was a challenging course, which was fast and mostly flat, running predominantly on pavements and quiet roads with a challenging hill early on.

The Hanney 5 is held over a rural course which and was a well marshalled easy-to-follow single lap of five miles finishing on the sports field behind the Hanney Village Hall.