If ever there was an event with a difference, this was it – the Run for Nepal at Sandon Park, Nuneaton.

I hadn’t even heard of it until a recent post by Dave Adams on My Running Club. So glad he did, because this was brilliant. Big thanks, Dave.  Four of us took part – Dave, Julie McCormick, Ian Cameron and myself.

We rolled up into the sizeable field on a warm Sunday morning, to be greeted by a family-friendly scene, with a scattering of stalls, a mobile Nepalese food outlet, red-white-and-blue bunting, a striking figure in traditional costume (complete with mask) and a Gurkha piper. 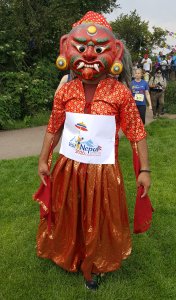 The run was scheduled to start at 11.00am – but actually set off at about 11.45am. I learned later this was because far more people turned up than expected; more like 300 than the anticipated 200!

But it didn’t matter. The relaxed, informal atmosphere eased the waiting time. And the turn-out was a boost for the cause – raising money for the Alzheimer’s Society UK, and the Newa Charity (Dharan), which helps underprivileged Nepalese in Nepal.

If you felt up to it, you could test your strength and stamina with a workout on Pull-Up apparatus. Pull-Up is one of the physical tests for Nepalese in Nepal during Gurkha Selection to join the British Army. 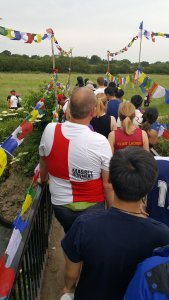 After announcements, there was a mass warm-up, where we were put through our paces with walking, stretches, squats etc. It felt like a big Racefit session.  We also crossed a narrow footbridge into a nearby field – part of the route – to scatter wildflower seeds. How lovely! Never done that at a run before. Should be an eye-catching blaze of colour once the flowers blossom.  Oh, and there was a display of a marshal-arts type dance by a group of energetic youngsters, and music by the piper.  And all before the start!

There were two routes – 5k and 10k. Julie and I took the 10k, Dave and Ian the 5k.  Part of the route is shared, before splitting for the different distances and then merging again in the run-up to the finish.  We started in the field and again crossed the narrow bridge over the River Anker, before following the Weddington trail through a field of near waist-high corn.

The 10k route veered off along a gravelly surface towards Camphill and a steep trail climb – I suppose you could call it ‘undulating’ – which most people walked up.  Once past the water station at the top, it was back down again before eventually turning on to the Coventry Canal and then easing along the back of Weddington’s Church Lane to finish. A ‘nice and gentle rolling route,’ as the organisers put it. 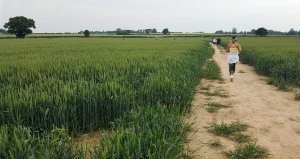 Race director was the charming Mr Vinod Shrestha supported, thankfully, by a small army of marshals to keep us on the right track!  Medals were presented by local dignitaries, and there was plenty of water and post-run bananas and apples.  The youngest runner was aged just six, and the oldest 74! Fantastic!

Entry cost – £6.00 (online or on the day), although naturally you could make a donation.

All-in-all, a great way to kickstart Sunday, and a little gem of an event right on our doorstep. 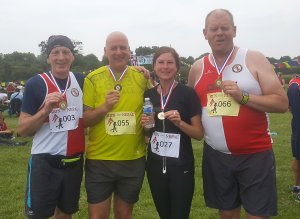