Last week I found myself travelling circa 500 miles *insert Proclaimers reference here* to run one leg of a relay marathon just south of Inverness. Despite running a short distance, this is going to be a long report just because it was a bit complicated!

The Dramathon is a multi-distance trail race around various whisky distilleries on the Speyside Way . There is a marathon, half marathon, 10k, and a relay marathon option. Somehow (I am assuming wine was involved) Di, Paul, and Sam roped me into joining a relay team and we signed up way before I found out about my NYC whoopsie. The course boasts amazing views, great support, a bit of a party atmosphere, and lots whisky samples in the goody bag.

I really hate whisky.  As a relay team we had to come up with a witty name and we called ourselves the “Tipsy teetotallers”……hilarious. We had personalised t-shirts made. Paul, Di, and Sam’s said ‘I’m doing it for the whisky’ on the back. Mine said ‘I don’t even like whisky’. 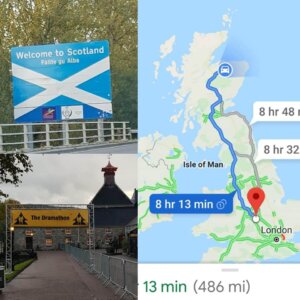 It is a long old drive from Southam, so Paul, Di, and I set off on Thursday morning to drive to Hamilton and stay at Sam’s one night, before continuing the journey towards Inverness on the Friday. On Friday afternoon we went to the Glenfarclas distillery to register, pick up our special Dramathon whisky glass, race t-shirt, bibs, and timing dibber. We also got to have a free dram of whisky –  I still hate it.

Race stuff and supplies sorted we settled into our cabin at the bottom of Ben Rinnes and played Cards Against Humanity before trying to get some sleep.  In the morning we all drove to the Glenfiddich distillery which was to be the race finish before getting on coaches to our various starting points. Logistics for the race were complex and despite a few coach timing snafus it was impressive how well it all worked.

Deciding who did which leg of the relay was done in a totally fair way🙄. One night, months ago, Sam and Di had a chat over Whatsapp and put themselves forwards for legs 3 and 4 as they had their favourite distillery’s. Paul was given leg 1 as someone had read it was the hardest, and I was lumped onto leg 2. 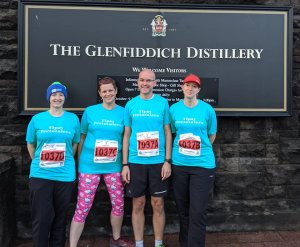 Paul and I got on a coach and Paul was dropped at Glenfarclas distillery (marathon and relay leg 1 start) and I was dropped at Ballindalloch distillery (leg 2 start). Di and Sam had time to kill so went and had a posh coffee in the Glenfiddich café and took joy in sending me photos while I freezed my arse off in a carpark queuing for one of two portaloos.  We had all agreed that as we had travelled so far, and it was such a beautiful place, we would run at a comfortable pace and stop to take pictures if we wanted and not feel in any pressure to get to the next stage in a certain time. As such I was expecting Paul to come in around the hour mark. At about 45 mins into the race it started absolutely pouring down and there was no shelter at all, so I was very chuffed when I saw Paul appear in the distance earlier than expected. We switched over the ‘dibber’ and I set off in the rain. Up a hill.

Taking over from a speedy runner meant that I was running with people much faster than me, as such I was constantly being overtaken, which was actually lovely as almost everyone had something to say about what was written on the back of my shirt! I had several offers to take my goody bag off my hands at the end, and also people agreeing that they hated whisky as well. There was a great spirit of camaraderie and I didn’t at all feel that I was in the way, or being left behind.

After the short hill we had to cross a main road, to do this we had to ‘dib the dibber’ to stop our time, wait until we were told it was safe to cross, cross and then redid the dibber at the other side before starting again. It was still raining. We ran down into a small village and then took a sharp left up a very steep hill. This was very unexpected, I had been told mine was the flattest leg! After the hill we flew down into the next distillery – Cragganmore, through the old workers buildings and then out onto the Speyside Way. Now the trail began proper!

The next 4 miles were flat, but pure mud. There was no point trying to avoid the boggy puddles, it was fun just to splash and splat through them all. The trail was gorgeous. At several points we crossed bridges with views over the river and the entire route was surrounded by the lush colours of the start of autumn🍂. I stopped to take a few photos, but the route was narrow and I was aware that the majority of runners were still faster than me so I tried not to get in the way too much. I only grabbed a drink at the aid station, but it was set up very much like a trail or ultra aid point. There was fruit, sweets, cake, pretzels, as well as the resources to refill water bottles etc.

As I was down to do one of 4 legs in a marathon I was expecting to do about 6.5 miles. So I was a bit surprised when I burst out on the trail into Tamdhu distillery which I knew was the handover point with Di for leg 3. I had only done 5.8 miles. I passed the dibber to Di, told her to enjoy it and not worry about racing it, and went off to find the coach back to Glenfiddich. I wanted some lunch!

!It is important to re-highlight that Di and Sam CHOSE their legs of the relay!*  The coach started up a steep hill out of Tamdhu and I realised that the runners were coming up the same hill. Di had a massive long uphill slog at the start of her leg which only got worse as after the road bit she then switched to an even steeper uphill trail!

Paul met me off the coach in Glenfiddich and it was our turn to go to the posh café and have lunch and a pint of IPA. Paul’s leg was also under 6.5 miles, and had been all downhill. We knew that Sam’s leg would be 6.2 miles as her leg was the same as the 10k route. This meant that Di’s leg must be making up for the shortfall in everyone else’s section. Whoops.

We soon heard that Di had passed over to Sam and was on her way back on the minibus. We found out that Sam’s entire leg was pretty much a constant uphill. Di made it back in time for us to all see Sam back over the line and we were all done! We got our goody bags and our medal (made from a whisky cask) and had another drink before heading back to the cabin for lots of pizza, wine, and more Cards Against Humanity.

On reflection this was a ridiculously long way to travel to run 5.8 miles! It turns out I ran the shortest leg and I am the one who needed to do the most miles. It was a very international affair with lots of teams and marathoners running from all over the world….500miles wasn’t so far after all! I would love to do the full marathon, it is such a beautiful route and a lovely friendly event. Would totally recommend it to anyone on the lookout for a trail race. 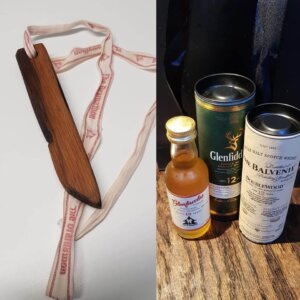